I don’t know what the temperature is like where you are but there are 75 school closings in my area this morning due to the extreme cold. We might get wind chills down to 45 BELOW zero! I don’t know what you have planned, but I think I’ll curl up and read in front of the fire for awhile. How about reading the Thaw series in front of the fire? It’s just been published and book two is being released today! I got to interview the author last night and had a lot of fun doing it. Enjoy the interview, the excerpt, and all the lovely pictures and cover art and the giveaway. And make sure you pick up a book or two. 😀

Hi, Elizabeth! Thanks for stopping by today. Okay, so I know a little about you, but my readers probably don’t. Could you tell us about yourself in four sentences or less?

I’m a writer, dream-live-or: but in my head I’m often a secret agent, or else a Cinderella princess on the cusp of discovery. Those two personas get me through just about any crises, and with the King as my Father, then they’re both very much true!

Awesome job! Ooo! The secret agent thing sounds fun! Can you share more or would that are you not allowed to share such classified information?

Actually, we grew up very rurally, which means we got a lot of unique experiences. But I always lived in my head more than anything else; so the lessons learned from books with larger than life heroes in them were some of my most inspiring role models. Personally, the Olde Englisch version of Robin Hood is my all time favorite hero, but in this day and age Sherwood Forest is a little hard to replicate. 😉 So secret agent is the next most realistic role to take on. 😉 Still, when the going gets tough, the tough get going… so even though I’m the “avoidance behavior” type, I call on the inner spy persona and manage the crisis. 🙂

Well, I heard something about you releasing a new series of books that are loosely based on the story that “Frozen” is loosely based on. Is this true? What is different (without spoilers) about the original story and also about your version of the story?

Yes, there are a ton of stuff that is quite different between the Disney version and the Anderson original… although the Disney film has a much stronger throughline than the somewhat meandering original, the Snow Queen has a lot more Christian themes in it. Which were a shame to lose… so we brought a lot of that back in.

That sounds great! I’ve always thought fairytales should have more Christian themes to them. I can’t wait to read your books!

Thaw: Winter Queen is the newest book in the series to be released and also the middle book in the series. Can you introduce us to the title character and tell us a little more about her? What is her name? How old is she? You mention something about neurosis. What is that and how does it affect her? Is she a queen to begin the story or does she become one after the story begins?

The title character is Ilise, princess of Noran, who, in true fairytale fashion, loses her parents at a young age and therefore basically the only authority figures that might have insisted she change her childhood faults. Because she chooses to avoid her problems instead of face up to her own part in them, she grows to adulthood without actually having to grow up.

And that is never a good thing, and always a guaranteed road to trouble.

Ilise felt her heart quake, but her mind had gone slightly numb, as if frost had crept in on it.

Then the dreamlike figure breathed out, and half a cool laugh rippled quietly around the lower edges of the room. The pale, perfect lips lifted in an amused smile, and the angel shook its head.

“So,” the voice was clear and bright, and sharp as a winter morning without a cloud, “This is where I find you, and this…” she lifted eyes to the walls, indicating the entire fortress, “is what you have been doing.”

The girl stared, her tongue as still in its bed as if she’d been born mute. After what seemed like forever, Ilise’s eyes were able to blink.

Some weirdish questions for you and the characters in Winter Queen:

They are definitely tea drinkers… 😉

What is your favorite hobby?

Ooooo…. that is a hard one. I have so many, it’s impossible to choose!! I guess it’d be an obvious answer to say that writing is clearly my most favorite hobby… 🙂

Do you have a favorite book?

Well, that would have to be J.R.R. Tolkien’s The Hobbit. It is so precisely crafted that you can pick it up at any page and be drawn immediately into the story.

It’s pretty much my favorite novel, and Tolkien is definitely a authorly role model!

Tolkien is definitely a good author and a worthy authorly role model. Thanks for stopping by today!

Thanks for having us, Faith! Thaw has been a fun series to work, and this is just the beginning! 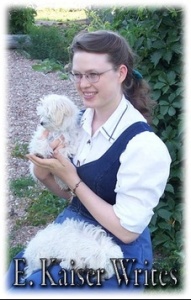 E. Kaiser Writes credits her nearly nomadic childhood for the vast reach of her fictional worlds; she has lived (and gotten to known the locals) in the Rocky Mtns, the Smoky Mtns, the plains, the deep forest, the searing Texas summer and frozen Minnesota north.She wears many hats: writer and editor of ad copy, web copy, office correspondence & fiction; a cowgirl, animal trainer, seamstress, jeweler, artist and… authoress!
Check out her blog, E. Kaiser Writes-A-Blog http://ekaiserwritesablog.blogspot.com/
Her author website EKaiserWrites.webs.com   http://ekaiserwrites.webs.com/
And the usual stuff… which she’d love to connect on! (She’s not super techie, and most everyone she knows on any of these she met online… so she’d love to meet more!!! )
Facebook Author page: https://www.facebook.com/pages/E-Kaiser-Writes-Author-Illustrator/308540109167073
Twitter: https://twitter.com/ekaiserwrites
Amazon author page, (with links to all her books!) http://www.amazon.com/E.-Kaiser-Writes/e/B006RY1L2E
and… Pinterest: http://www.pinterest.com/ekaiserwrites/
About the Books

A barren king and queen pray for a child, and when in their loneliness, they make one out of snow, 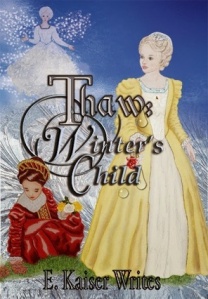 their prayers are answered in a special, and unusual way.
Sometimes, when we get what we wish for, we don’t know what to do with it.Combining elements from the Snow Maiden, Schneekind, Snegurochka tales with those of the Snow Queen; Winter’s Child introduces a new series: THAW.
Live on Amazon: here is the link:
http://www.amazon.com/dp/B00RUDQMXO

A slightly pampered girl allows her avoidance behavior to isolate her from the world… and it’s only when she takes the final step that she realizes the wall she’s built in the name of safety is also the one that will hold her prisoner forever… unless she discovers how to destroy it.

The only one who can break a neurosis… is the one who has it.

Combining elements from the Snow Maiden, Schneekind, Snegurochka tales with those of the Snow Queen; Winter Queen continues a new series: THAW.

Released today! It is available on Amazon: www.amazon.com/dp/B00RWUVZQO/

The whole world knows his guilt, and is absolutely correct about it, but how far can a man go to 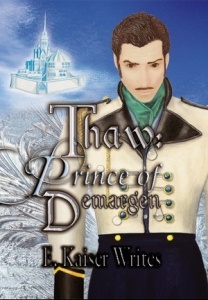 Or is an honorable death the best a fallen star can hope for?

The only person who can help him… is the one he most deeply wronged.

Prince of Demargen is third in a new series: THAW.

Being released on Saturday, January 10th!

0 thoughts on “Are you cold enough yet?”