Do you remember my review of Resistance about a year ago? Well, I had the privilege of beta-reading the second book in the series and receiving an advanced reader copy to review for Jaye’s release tour. The second book in the Ilyon Chronicles Series, The King’s Scrolls is now available! For this blog tour, I am reviewing her newest book, The King’s Scrolls, as well as interviewing one of my favorite secondary characters, Liam Altair. Make sure you read to the end so you can enter the exciting giveaway.

Warning: Do not read this book in the same room as other people if you don’t want them to see you cry or wonder why you are laughing.

Following the harrowing events that brought them to Landale Forest, Jace and Kyrin have settled comfortably into their new lives and the mission of protecting those under the emperor’s persecution. The fast approach of winter brings with it the anticipation of a quiet few months ahead. That is until the arrival of four mysterious, dragon-riding cretes who seek aid in a mission of great importance—not only to their own people, but to all followers of Elôm.

Hidden in the vast mining valley north of Valcré, a faithful crete has spent years sharing his knowledge with the destitute miners and their families and is known to possess what may be Arcacia’s last surviving copies of the King’s Scrolls—the Word of Elôm. Joining the cretes, those in Landale must find the crete teacher and bring him to safety, but it is a race against time. Should Daican’s men find him first, execution and the destruction of the Scrolls is certain.

When disaster strikes, all seems lost. Could Elôm have a plan even in the enemy’s triumph?

There is so much I wish I could say about this book, but I can’t because there would be too many spoilers. As much as I loved Resistance, in some ways, I think I liked The King’s Scrolls better.

The characters were great! The continued development of all the characters from Resistance was well done and believable. The new characters who were introduced were also done well, especially Timothy and Leetra. I am very interested to see where each of these characters go in future books.

Superb. The dialogue was very well done. Not once did I think something was too modern sounding or said too soon.

Can I give this part 2 stars? No? Okay, fine. Besides the fact that I was on pins and needles and hated the characters having to go through what they did, the plot and storyline were…amazing. All the delicate intricacies, everything that needed to connect and happen. It all made for a wonderful, amazing book.

I read an advanced reader copy, so there were still a few typos in the book, but nothing that took me out of the story. Overall, the writing was excellent.

This section along deserves five stars. I know the first time I read the book as a beta-reader, I couldn’t stop reading! The second time, I had to force myself to stop reading because I knew what was coming and knew I couldn’t read it at that point. As I came to the end, I again forced myself to stop when  a particular event was about to happen because I was in a room full of people. Granted, they were family, but I couldn’t read it around them. It would have been much too difficult.

Recommended Ages: 13 and up due to some violent content (not glorified, just the result of cruel people during a time of war)

Get this book. Now. It is amazing and well worth the  money. As soon as autographed copies are available, I plan to order mine to add to my bookshelf next to Resistance. Even if you don’t usually like Fantasy (like me) you should at least try Jaye’s series.

And now on to the part of this post that I looked forward to the most. Well, besides reading The King’s Scrolls. 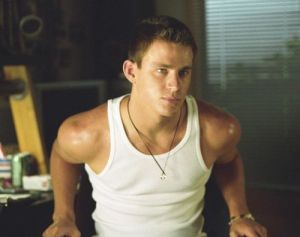 Hi, Liam! Thanks for joining me today!

*nods, looking a little uncomfortable, but smiles* Thanks for having me here.

What is it like to kind of be a “hiding behind the shadows” sibling? Marcus is a great military leader, Kyrin and Kaden both have special abilities. And then there is you. The one who is pushed and pushed and pushed by your grandfather and no matter how hard you try, you seem to always fail. How hard is it to just be you?

I like keeping to myself and hiding behind the shadows, actually. I just try to avoid conflict, but it’s not easy when you have a grandfather like I do. I really have no choice but to try to be what he thinks I should be. *shrugs* It’s just the way it is. I try my best to please him, but I’m not sure I ever have. Or ever will. It’s hard. I wish things could be different, but I try not to think too much about it. It just makes it worse.

If you could do anything in the world, what would you do?

*sits and thinks for a moment* I’m not sure, I guess. With my grandfather so active in my life and around so often, I feel like I’ve grown up in the army. That was what was always expected of me. I was never given a choice about what I wanted to do. I do like helping people. I’m not sure what I’d do with that, but it would be better than fighting people.

If you could be anybody in the world, who would you choose? 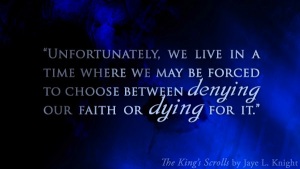 My older brother, Marcus. He seems to have it all together. He always knows exactly what to do, and the men he captains respect him. I don’t know what it would be like to have that kind of confidence.

What is your greatest fear?

*laughs dryly* I don’t think soldiers are supposed to have fears, at least not if they’re the General’s grandson. Honestly? I’m pretty afraid of him. But I’d say my greatest fear is losing my family. Who would I have if I didn’t have them?

What is your greatest joy?

I’d say the times I get to visit home and don’t have to play the soldier. Those are really the only times I get to be myself. I like to play with my little brothers. It gives me joy to see them while they can still have fun and don’t have the cares they’ll have to carry when they join the army. Because we all know they’ll be soldiers one day.

What do you think is your most important accomplishment and the thing/event that defines who you are?

*shrugs and doesn’t answer for a moment* I don’t think I have one. I’ve been in the army for six years. Marcus has already made it to captain. I’m still just a foot soldier. I have no desire to be in a leadership position . . . but it is hard to have everyone know who you are and compare what little you’ve done to what your siblings have accomplished. I’m not sure how that will ever change though.

Do you have a favorite food? If so, what is it?

Anything besides our army rations. *smiles* I like the food I get to eat when I visit home. Our housekeeper is a pretty good cook.

Is there anyone in particular you admire and why?

Besides Marcus, I greatly admire my father. He’s a soldier, but he’s kind. Probably the kindest man I know. He cares about people, especially if they’re struggling. I wish, at least, I could be more like him.

If you haven’t read Resistance yet, it’s on sale this week for just $0.99! 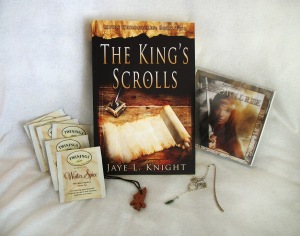 Share in the excitement of the release and enter to win a themed Epic Winter giveaway! Prize pack includes an autographed copy of The King’s Scrolls, a CD by Future World Music (some of Jaye’s favorite writing music), a dragon bookmark, a stone hawk pendant (much like the ones mentioned in the book), and a few packages of Twining’s Winter Spice tea to sip while you read! (Giveaway is open to US residents only. Cannot be shipped internationally.)

Make sure you check out the other blogs on the tour. There’s lots of fun reviews, interviews, and character spotlights. My personal favorite so far has been the Q & A session with multiple characters on the Ilyon Chronicles blog. For a full schedule, go to Jaye’s blog at this link.

0 thoughts on “The Kings Scrolls: a review and interview”