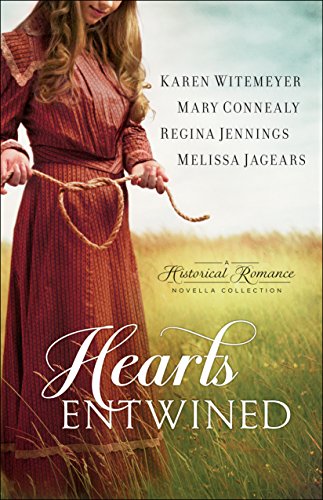 The Love Knot by Karen Witemeyer
This is the best novella in the book. The uniqueness of the plot and the completeness of the story definitely had something to do with it. This novella is the continuation of a series I have read, but even if I hadn’t, I would have been able to understand everything going on in the story. There might have been a few characters I was slightly confused about, but otherwise, no problems. The characters were well developed, the early twist was unexpected, and everything that happened progressed at a pace that was actually realistic—a rarity for most romance novels/novellas. I liked how short it was to read. I actually finished the novella in one sitting!
5/5 stars

The Tangled Ties That Bind by Mary Connealy
This novella is also part of a series. I have read a on or two of the books, but not enough. There were mentions of other characters who I had no clue about and also previous things Connor had done. Some of them made sense, but unless you’ve followed the series, I think this novella has some minor plot points that are hard to understand. The characters were well developed, the plot line was pretty good, and since the characters knew each other for so long and had already been in love, though grown distant over the years apart the romance even progressed at what could be considered a realistic pace. This one was easier to put down than the previous novella except towards the end.
3.5/5 stars

Bound and Determined by Regina Jennings
A Western with camels. This one definitely held a bit of interest simply because of that. Private Bradley Willis and Ambrosia Herald were very colorful characters, although, I think I liked Captain Herald a bit better than these two. He just didn’t get enough time in the spotlight. The hard thing about novellas is that character development can be a lot more challenging and the plot points are much more condensed. Though these characters were developed fairly well, I felt like something was missing. The plot points were also a bit hard to follow and there seemed to be a lot going on. Getting the camels through the desert and passed the Indians was hard enough, I don’t think the added outlaw gang was necessary and it got resolved a bit too quickly for my taste. Overall, the story was a good one, even if the romance aspect seemed a bit too rushed like with most romance books.
3/5 stars

Tied and True by Melissa Jagears
This is my second favorite of the novellas. Marianne’s determination won me over. Plus her big heart and determination. Oh, did I already say that? Though never put in that position, I could understand Calvin’s hesitation to marry Marianne, especially after we found out more of his backstory. This novella had a good, realistic plot line, the characters were well developed, andI read it in two sittings (only because I had to).
4.5/5 stars